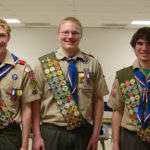 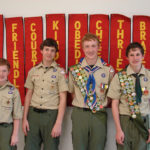 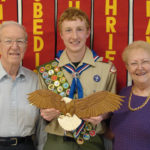 Brad Hendricksen is the son of Carl and Carol Hendricksen. He finished his Eagle scout court of review on Aug. 24, 2011.

Christian Lees is the son of Susan Esch and Tony Lees. He finished his Eagle scout court of review on Feb 15, 2012.

Both are seniors at PND and will graduate on June 3, 2012. Both completed their Eagle scout projects at different areas of the Forest Park Nature Center. Brad’s project involved replacing some stairs and installing water bars on a section of trails. Brad and Christian also are on the Cross-country and track team together at PND.

Christian installed water bars, rerouted a trail that was eroded, and cut away exposed roots on the trail, without injury to the surrounding trees.

Boys join the Scouts at the end of their 5th grade year. They achieve merit badges by attending summer camps or other Scout activities with the troop. Once a month they have campouts that the children plan including deciding the menu and purchasing food. They must also plan their activities or work on other skills on these campouts.

In order to attain Eagle they must complete a minimum of 21 merit badges with 12 of those being specifically Eagle Scout required. Christian has 39 badges and I believe that Brad has even more than that. They must also demonstrate leadership and abide by the Scout Oath and law. Their Eagle scout projects must be thoroughly planned out and organized and approved before they move on to actually completing the project. Then they must submit project details, including how many people worked on the project and how everything went and costs along with pictures of the project. They also submit their Eagle scout application and recommendations from parents, teachers, scoutmasters, and clergy at this time. Their project must be completed before they turn 18 years old.

The picture with the three boys, Christian Lees, Sean Patrick, also a senior at PND, and Brad Hendricksen, represents a long journey they all have taken. They started out with a few other boys that joined the troop at the same time. These three boys have all completed this together.

One picture is with the grandparents of Christian Lees, Vernon and Lora Esch. Vernon made this Eagle for Christian. They currently live in Arkansas.

“As I told the people at the ceremony when I gave my parent’s speech, it was so appropriate to have the Hendricksen family and my family doing this ceremony together. I first met Carol Hendricksen at the Glen Oak playground. She was hosting a new students gathering of kindergartners at St. Thomas. Christian is my oldest so it was nice to meet other parents. Then Carol and I both attended RCIA class together before Brad and Christian took their 1st communion that year. Now our children have grown up together and have become great young men who believe in community service and helping others. The Boy Scouts have made them more confident and developed their leadership capabilities.”

During Lent an evening Mass is added at 5:30 pm